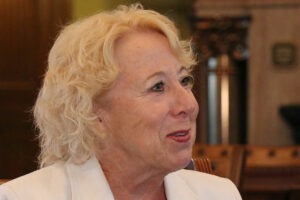 Former State Senator Christine Downey recalls her three terms in the Kansas Senate (1993-2004) during her 2019 oral history interview. With her background as a teacher, education issues were important to her as the era of school-funding litigation continued. She was involved in water-related policy making, in particular at the nexus of water quality and agricultural practices. She recalls her service in the Senate and on the Kansas Board of Regents first developing the policy and then implementing fundamental changes to the postsecondary education system. Ms. Downey discusses numerous instances of working across the aisle Show Moreto accomplish policy objectives that did not break on strict party lines. Show Less 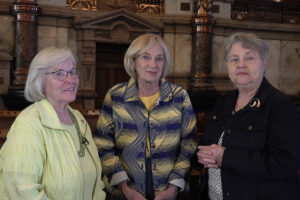 The Ladies Room is a short Statehouse Conversation with former Kansas State Senators Janis Lee and Lana Oleen facilitated by former State Representative Joan Wagnon. The conversation centers around the culture of the Kansas Senate when Lee and Oleen served their first session in 1989. Altogether, eight new women Senators began their service that year. Lee and Oleen rose to leadership positions in their respective caucuses. 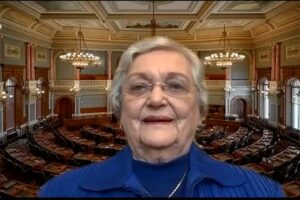 Ardena Matlack describes the Kansas House of Representatives in the 1970’s when so few women were in the Kansas Legislature. Additionally, her second term she experienced being in the majority as a Democrat—something that seldom occurred. While in the majority, she started on the Federal and State Affairs committee as Vice-Chair, and moved up to chair the committee the second year of her term. The committee dealt with the ERA, abortion, liquor and a host of controversial issues. She also served on the Judiciary committee. Her discussion of gerrymandering shows the difficulty in dealing Show Morewith reapportionment that led to her husband losing his Senate seat and encouraging her to run for the House. She also dealt with environmental issues and water issues, particularly in Sedgwick County. Matlack worked with Treasurer Joan Finney to get the first Unclaimed Property law passed. Show Less 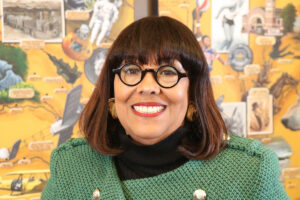 The interview begins with Pamela Johnson Betts talking about attending Washington Elementary School, which was one of the schools noted in the landmark Brown v. Board Education case that overturned segregation. She describes her friendship with Cheryl Brown Henderson, daughter of Rev. Oliver Brown who was the plaintiff in the case, and the fact that the family never talked about the landmark case. The two women worked on saving the Monroe school building in the early days before it became a national historic site. This was the beginning of a 50 year career in public service Show Morefor both. Ms. Johnson Betts also talks about an experience she had in the 7th grade when a teacher slapped her (the only African-American student in the class) and the lessons from that experience. Later in the interview she compares the leadership styles of the three governors with whom she worked and some of the public policy issues she was responsible for managing, such as childhood immunizations, public health. Her own experience in working on issues affect the elderly was shaped by those earlier experiences. She was fortunate to find other African American women role models in top management positions, such as Dr. Joycelyn Elder, Surgeon General of the United States. Even as a member of the Governor's cabinet, she continued to experience incidences of racism directed at her. She talks candidly about how she dealt with those incidents and their impact on her. The interview concluded with her stating that "public service is the rent we pay for living on this earth." Show Less
Page load link
Go to Top