Skip to content
Home/Topic: Attorneys in the legislature/
Refine Your Results

Topic: Attorneys in the legislature 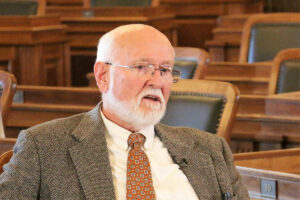 Marvin Barkis discusses, in detail, the various processes within the House of Representatives in its day-to-day work. He points out differences in working as the majority versus the minority party and talks about working with the governors during his terms in office. When Barkis was the minority leader, he tried to build a sense of community among party members to facilitate working together. Barkis also made changes in legislative procedures to promote efficiency. Much of the interview addresses these internal procedures. Marvin Barkis' primary legislative passion was children’s issues and the interview covers the various attempts to Show Morework on a variety of topics to aid children. He was also involved with school finance, reapportionment, and the death penalty. Show Less 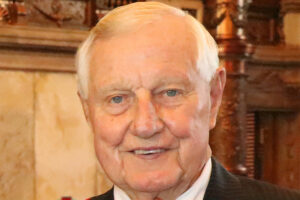 Former Senate President Dick Bond candidly discusses his 14 year career in the Kansas Senate which followed a 25 year career in Washington DC as chief of staff for 3 congressmen. Well known in Kansas Republican circles, Bond was appointed to fill a vacancy when Senator Jack Walker became Lieutenant Governor. Bond compares the politics of Washington to Kansas. He saw the passage of liquor-by-the-drink as a boon to economic development. Bond is most proud of the renovation to the Kansas Capitol which was started under his term as President of the Kansas Senate. He Show Morereflected on the changes in the Republican party in recent years and the role the Right to Life movement played in those changes. Show Less

Tim Emert's interview covers his Senate career in the last decade of the Twentieth century, following passage of a markedly different school finance bill in 1992 and with a divided Republican caucus in the Senate--a time of big change. Emert stepped into the chairmanship of the Senate Judiciary committee immediately and later moved up to Majority Leader by a one-vote margin. The interview is filled with descriptions of coalitions he formed to get legislation passed. As Judiciary chair Emert dealt with both the death penalty, which he personally opposed, and a bill restricting late term abortions which Show Moreno one liked but passed. He worked with Christine Downey to get a major policy change regarding community colleges. There are also descriptions of his work on the State Board of Education and later, the Board of Regents. Emert describes himself as neither moderate or conservative, but "a realistic Republican." As Majority Leader he talks about the "juggling act" trying to keep communication with the conservative House Speakers (Shallenburger and Jennison) and the Senate. He explains the tension in having both the poorest and richest counties in his district and trying to provide equalization of school funding. The interview touches on the renovation of the Capitol and also renovation of Cedar Crest. Show Less 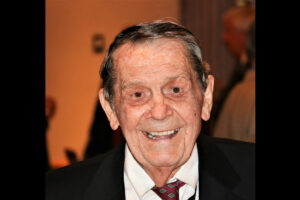 Jack Euler talks about his ten years in the Legislature and the formal and informal leadership dynamics he witnessed. Euler notes the changes in the Legislature that began with initial implementation of the one person, one vote principle as the basis for legislative districts rather than the county-based system that had existed since statehood. He describes how redistricting gradually changed the urban-rural dynamic of the House. Euler also reflects on the influence of lobbyists on both legislation and leadership in the House. 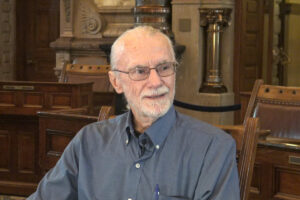 Robert Frey had considerable impact on the legal system after he arrived in 1975. Court unification had passed as a constitutional amendment; now the legislature had to implement it. Early in his legislative career Frey took on some controversial issues, such as the hearings he held in the House Judiciary committee on the Posse Comitatus to ban paramilitary training and legislation ensuring every county had a judge. This interview does not deal with the plethora of issues which originated in the House Judiciary committee under Frey's leadership, such as codification of the sexual crimes including marital rape, Show Morebut it does reveal his philosophy about the law, the courts and judges. The interview also provides a glimpse into the rise of the conservative influence from a group know as "the Cowboys." The interview concludes with a discussion of activities on the Board of Tax Appeals. Show Less 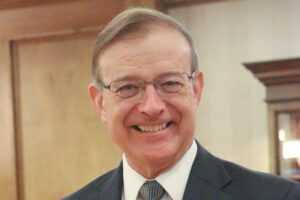 In this 2014 oral history interview, Dave Heinemann recalls his long career in the Kansas House representing Garden City, a career that spanned the years during which there were important changes in Kansas government. He served during an era when rural influence in the Legislature was waning due to fundamental changes in legislative districts. Heinemann's recollections of how legislators serve their constituents and how they worked with one another to craft legislation paint a picture of collaboration in the creation of public policy. His perspective points to the importance of personal relationships with colleagues within the chamber, Show Moreacross the rotunda in the Senate, and with the Governor's office. Show Less 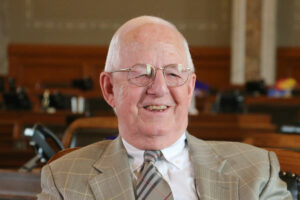 Pat Hurley had a wide ranging career for over 40 years as a legislator, administrator, lobbyist and lawyer where he had a profound impact on Kansas public policy and government. Hurlely's rapid rise to a leadership position in the House is unprecedented; he credits his legal training with his ability to analyze legislation. His close association with former Governor John Carlin led to his becoming Secretary of Administration and centralizing and standardizing many of the processes of that agency. While Hurley was Majority Leader, he developed working relationships that were critical to his success. The death Show Morepenalty and a proposed new prison were two issues he dealt with as Majority Leader. Hurley was attracted to working for Governor Carlin by the opportunity to manage policy issues, functioning as a de facto chief of staff to the governor while he was Secretary of Administration. Hurley developed a process for policy analysis in this role. Hurley left the governor's office after five years and began working as a contract lobbyist on big state issues such as multi-bank holding companies and several transportation plans with Economic Lifelines for several governors. He also did contract procurement work for corporations and businesses. This interview is a good look behind the scenes at how government functioned and how policy is developed and passed. A version of this interview is also posted on KansasMemory.org, the website of the Kansas Historical Society. Show Less 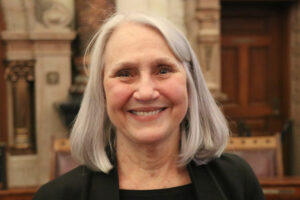 This 2020 oral history interview of former State Senator Nancy Parrish is packed full of information about people and policy between 1980 and 1992 in the Kansas Senate. She was one of the first, if not the first Democrat women elected to the state senate. Parrish talks about establishing her own identity after filling the unexpired part of her husband's term and winning the seat three more times while fostering a child, adopting a child, and attending law school at Washburn University. Her relationships with Republican senators allowed her to be effective in passing or shaping legislation. Show MoreParrish served on the conference committee to negotiate the 1992 school finance bill. Parrish also discussed her two years as Secretary of Revenue and working with Senator Gus Bogina to pass legislation to provide for purchase of a large-scale computer system for collecting taxes at the Department of Revenue. Parrish offers opinions on the importance of the separation of powers in the constitution, from her perspective as a former legislator, an executive branch administrator and a judge. For Parrish, each of these experiences has been a learning experience. She concludes the interview by expressing concern about the loss of "camaraderie" among legislators. Show Less 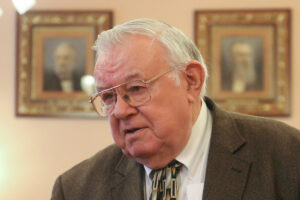 In his 2015 oral history interview, former Representative Ralph Skoog recalls a Kansas Legislature in transition. Ralph was initially elected to represent Topeka and Shawnee County in 1961, prior to the U.S. Supreme Court's Baker v. Carr 'one-person, one-vote' decision. His first 'district' was one-third of Shawnee County. When he returned to the House in 1967 after an unsuccessful campaign for Congress in 1964, he represented a more equal-size district of approximately 17, 000 residents of the County. Ralph recalls a legislature very much in transition at the beginning of the decline of rural domination of Show Morethe policymaking process and at the beginning of institutional change that came to fruition after the end of his last term. He recalls passage of important highway, prison, and school district consolidation legislation during his time of service in the House. Show Less 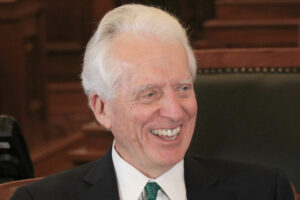 The 1970's marked major changes in state government. They are doing away with county welfare offices and creating the Department of Social and Rehabilitation Services (SRS) Concerns over lack of equalization started with Caldwell school finance case. Transportation is being centralized and modernized with the creation of the Department of Transportation (KDOT). Slattery even introduced legislation to decriminalize small amount of marijuana. Campaign finance reform (post-Watergate) and hiring non-partisan, professional staff for the legislature took hold. Slattery and another new freshman, Mike Hayden support legislation to clean up strip mines and reclaim mined Show Morelands. The first income tax reform was initiated despite the governor's veto. Community corrections is emerging as a good strategy. Slattery describes the role of abortion in civil discourse in this interview, how it started in the Dole/Roy race in 1974, and how it continues to distort the American political system in a significant way. He explains why he ran for Congress as a deficit hawk and talked about some of his Congressional experiences. The interview closes with a story about Tip O'Neil and another about former Speaker Clyde Hill who advised Slattery to be accurate when speaking at the Well of the House. Show Less
12Next
Page load link
Go to Top